KEA | ISLAND OF THE WATER NYMPHS

Kea is an island covered in myths and history. Else known as Hydroussa owing to its plentiful water sources and thick vegetation, it is said to be first inhabited by the Water Nymphs who kept the island fertile with abundant greenery.

The island has managed to retain its traditional character with its charming villages, while its magnificent archaeological sites, its beautiful seashores and the Royal Oak forest, a rare phenomenon for the Cyclades, make Kea a popular and very convenient, due to the proximity to Athens, destination.

The peculiar artistic atmosphere of Ioulida (Main Town) is also different from the other Cycladic islands. Red-tile-roofed houses and labyrinthine alleys, arched passages, deserted windmills and stone squares spread around the imposing castle of Kea. Scattered rural villages, monasteries, chapels and churches embroidered on the rocks, fountains, mythical sources and the setting sun behind the temple of Poseidon complete the unique image of the countryside. The mountain landscape of Kea is interrupted from fertile valleys of oak and almond trees stretching all the way to the shore opening out into charming bays and coves. Hidden beauties pass through the traditional settlements and the verdant forest until remote beaches of outstanding beauty.

Nonetheless, the most intriguing side of the natural beauty of Kea is hidden through its medieval trails that used to connect the ancient four cities of Ioulida, Korissos, Poiessa and Karathea, challenging you to cross the island on foot in order to discover the abundance of the natural environment and the timeless presence of Kea in history.

Two ocean liners requisitioned for the World War I effort sailed into the Aegean in November 1916, just a week apart. The first, the SS Burdigala, was being used by the French to transport troops and ammunition to the Balkan Front. The other, the HMHS Britannic, a sister ship of the Titanic, was put into the service of the British and transformed into a floating hospital in the Mediterranean. Both went down, separately, in the Kea Channel, in almost precisely the same spot, after ramming into mines. From their construction to their demise, the two ships are an important part of maritime history and evolution, built at a time (between the late 19th and early 20th century) when fast, safe and comfortable sea travel was still a major challenge.

Private Guided Walks in Ioulida and/or the archaeological sites of the island (Korissia, Poiessa and Karathea) are available upon request.

Link to Greece Is

Villas in the area 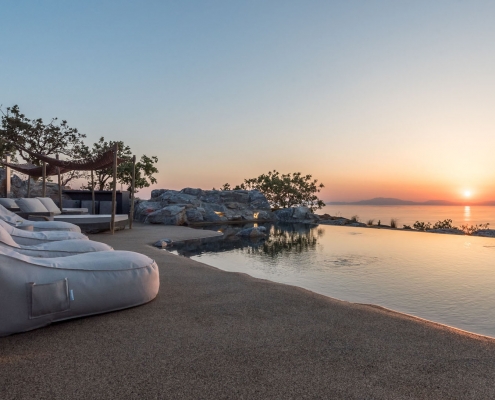 Delphi
Scroll to top
We use cookies to ensure that we give you the best experience on our website. If you continue to use this site we will assume that you are happy with it.OK